Synthetic drugs are growing in popularity around the nation. However, what are synthetic drugs, and what kind of dangers do they pose? People shouldn’t make the mistake of thinking that they’re safe. Knowing the answers to these questions can protect them from deadly designer drugs.

Specifically What Are Synthetic Drugs? 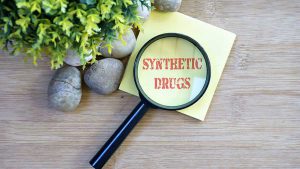 Basically, designer drugs contain man-made chemicals. Other drugs such as cocaine and weed typically come from natural sources. Many designer drugs are on the street, including:

What Are the Dangers of Using Synthetic Drugs?

When people buy designer drugs, they don’t actually know what they’re buying. In many cases, the drugs contain harmful chemicals. To make matters worse, each drug varies in strength. Sometimes they’re too strong and lead to overdose after a single use.

Why Do People Buy Designer Drugs?

What are synthetic drugs purpose in recreational use? The main reason why people buy synthetic drugs is because they’re cheaper than natural drugs. Also, dealers get away with legally selling them most of the time. Gas stations and locally owned stores around the nation, for example, sell synthetic drugs.

However, if designer drugs are so dangerous, how can people sell them legally? The reason is because they sell them with the warning “not for human consumption.” In addition, they could label the drugs as plant food or fertilizer.

The U.S. government tries to regulate these drugs, but it’s difficult. To make the drugs illegal, lawmakers have to ban the chemicals that people use to make them. The only problem is that the makers constantly change the chemicals that they use. This factor makes it difficult to keep designer drugs out of shops.

Fight Back Against Synthetic Drugs

Don’t let man-made drugs lead you down the road to addiction or continue to damage your life. Learn more about what are synthetic drugs. We can help if you call 866-345-2147 to speak to one of our friendly staff members.